Tonight is the beginning of Rosh Hoshanah. The people over at the Sun-Sentinel put together this slideshow of sexy Jewish stars. Any list that includes Isla Fisher is okay in my book!

Email ThisBlogThis!Share to TwitterShare to FacebookShare to Pinterest
Labels: celebrities

Fare thee well Mr Newman. You were one of the good guys.--Tiki 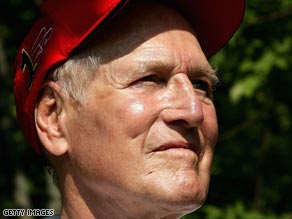 (CNN) -- Paul Newman, the legendary actor whose steely blue eyes, good-humored charm and advocacy of worthy causes made him one of the most renowned figures in American arts, has died of cancer at his home in Westport, Connecticut. He was 83.

He died Friday, according to spokeswoman Marni Tomljanovic.

Newman attained stardom in the 1950s and never lost the movie-star aura, appearing in such classic films as "Cat on a Hot Tin Roof," "Exodus," "The Hustler," "Cool Hand Luke," "Butch Cassidy and the Sundance Kid," "The Sting" and "The Verdict."

He finally won an Oscar in 1986 -- on his eighth try -- for "The Color of Money," a sequel to "The Hustler." He later received two more Oscar nominations. Among his other awards was the Motion Picture Academy's Jean Hersholt Humanitarian Award.

Newman was a Method-trained actor who blazed his own career trail and didn't shy away from risky roles -- inside and outside films.

A portrayal as a race-car driver in 1969's "Winning" led to his actual competition in races; at 70, he participated in the 24 Hours of Daytona and he was still racing at age 80.

He stumped for liberal causes, including Eugene McCarthy's 1968 presidential candidacy, and earned a spot on Richard Nixon's enemies list -- "the highest single honor I've ever received," he said.

In 1982, Newman and his friend A.E. Hotchner founded Newman's Own, a food company that produced food ranging from pasta sauces to salad dressing to chocolate chip cookies.

"The embarrassing thing is that the salad dressing is outgrossing my films," Newman once wryly noted.

To date, the company -- which donates all profits to charities such as Newman's Hole in the Wall Gang camp -- has given away more than $200 million. Newman established the camp to benefit gravely ill children...

Posted by tikitender at 10:44 AM No comments:

Visit my recipes page for some new stuff! Look for the following among the new recipes: Shake the liquors and pineapple juice with ice. Strain into a chilled cocktail glass. Drop in a dash of grenadine. Garnish with and orange wheel.

Shake all ingredients with ice. Strain into a chilled cocktail glass. Garnish with a lime twist.

Posted by tikitender at 11:45 AM No comments:


Everybody on your knees
"It's God" say the "Polynesse"
They worship me mistakenly
I say "Tiki, who was he?"
Trader Vic at Hinky Dink's
He liked sex and he liked to drink
Built a temple to have fun
Huri Popo everyone

Aku-Aku, Mai-tai
Tonight's the night it'll be just fine
Gombay Smash or Kapu-Kai
Can't be bothered by the 9 to 5
Gotta get down at the coconut lounge tonight

Island people are a generous bunch
Offering drinks and buffet lunch
No missionary could ever see
Their downfall in Tahiti
Could this be paradise?
Hula skirts are really nice
Sweet and fruity drinks with ice
If I die this would suffice

E Komo Mai! Let me make you a drink this week!

Here is what I will be pouring for your pleasure this week:

Thursday Night is $2 Bud Light bottle and $2.75 Cuba Libres every week at the lion. In addition to those inexpensive specials I am going to be making fresh Batidas Morango. A Batida is a Brazilian specialty with fresh fruit and cachaca. This will be a frozen concoction with whole sugar and fresh strawberries. Prepare yourself for delicious goodness!

Friday Night gives you a chance to try Hpnotiq in the form of the Hpnotiq Breeze, with vodka and pineapple juice. Hpnotiq is an exquisite blend of premium vodka, natural tropical fruit juices and a hint of Cognac

Saturday Night is back to Brazil with the Lambada. Made from scratch with Agua Luca cachaca, cream of coconut, half & half, and cherry juice. Served shaken and poured over ice, topped with a mint leaf.

Monday Night is Margarita Madness at the Lion. $3.25 house 'ritas all night long, along with Corona and food specials. I will be making the house 'ritas in bulk, but for a treat try one of my specialties, the Catalina Margarita. Cuervo gold, peach schnapps, & blue curacao combined to make a tasty Pacific blue 'rita.
Posted by tikitender at 8:52 AM No comments:

Thirteen-year-old Melissa Benoit disappears in her hometown of Kingston, Massachusetts, on her way home from a friend's house. Although the town detective talked to everyone who lived on the path between the two houses, no one admitted to having seen Benoit. Soon afterward, the FBI joined the search. Yet, despite their use of tracking dogs, there was still no sign of the young girl.

In an unusual move, the FBI asked neighbors to take polygraph tests. Henry Meinholz, a local Bible school instructor who took the test, did not appear to be truthful. Perhaps in an attempt to deflect suspicion, he later claimed that he had failed the polygraph because he often fantasized about molesting little girls. He also admitted to the agents that he had followed girls and masturbated in his car in the past.

The FBI immediately began a thorough search of his house, where investigators found Benoit's body under a pile of dirt and coal in the basement. Meinholz confessed to rape and murder, claiming that voices in his head had commanded him to kill.

According to his account, a voice (which became the center of his insanity defense) said, "You're not a man unless you have her. Do it!" However, after a short trial, the jury rejected his defense and convicted him of first-degree murder. When he issued a life sentence without parole, the judge stated, "It is said that my predecessors in colonial times had a gallows erected on the green in front of this courthouse and summarily sent defendants convicted, as you have been, to be hanged. I truly regret that option is not open to me in this case."
Posted by tikitender at 9:43 PM No comments:

Email ThisBlogThis!Share to TwitterShare to FacebookShare to Pinterest
Labels: history

Zambrano threw his first career no-hitter and the first by
a Cubs pitcher in 36 years as Chicago beat the Houston
Astros 5-0 in a makeup game played in front of a very
pro Cubs crowd of 23,441 at Miller Park.

The two teams had been forced to relocate after Hurricane Ike
struck Texas and the Houston area Saturday morning. Zambrano
(14-5) struck out 10 Astros in his 110-pitch outing while
walking one and hitting a batter.

I Was Baker Acted!! As most of you know, I went up to Fuel in Jacksonville on Sunday night with DJ Vern to see The Boss Martians. We left pretty early and actually beat the band (they were driving up from South Florida) by a long shot. So we found Fuel and struck up a conversation with Jim at the door (I am pretty sure he is the owner of the club, at the least he is the boss), told him we were there to see the Martians, etc. We asked where to grab something to eat and he sent us to Raglands, a couple of doors down. He said to tell them he sent us and we would get a discount.

Before I continue, if you find yourself near the Riverwalk in JAX, take a short drive over the Five Points area and grab a meal at Raglands. You won't be sorry.

Vern was wearing a Boss Martians T-shirt (I in my kilt) when we walked in and sat down at the counter. There was a couple seated at the counter and the guy said "Are you guys with the Boss Martians? I am the guitarist for Baker Act." We exchanged hellos and the next thing you know the rest of the band (sans drummer, who showed up later) walks in and we are all chatting and drinking together. Early in the conversation, the guitarist girlfriend says to me "Your face looks very familiar. Do I know you?" After a short conversation we realize that she is the longtime best friend of Cristal, one of my original Myspace friends! The lead singer, who is a tasty Torrid-clothed blond, invited me out for a smoke. Then it was time for them to unload etc, so they went on their way. What a super groovy collection of people!!!

So on to the music. Alternative punk with an attitude, fronted by Danielle. Start with Ann Wilson (classic Ann Wilson, not the watered down 80's version), roll her around in the dirt a little bit, give her some some torn fishnets and some school girl skirts, and you have Danielle. I am usually a little turned off by female fronted rock but she definitely elicited quite the opposite response from me.

Inked and spiky haired Elizabeth on bass and her brother Rudy on guitar have a terrific banter and energetic stage presence that kept me entertained between songs and while they were playing.

Rounded out by Marz, who beats her drums like an unloved step-child, Baker Act is well worth checking out if you get the chance.


You can check out their music on myspace at http://www.myspace.com/wearebakeract.

Sadly, my personal favorite song Psycho Chick is not on the myspace page so I have included a video below. Favorite line of the song: "I'll be your stain, so shout me out." LOVE IT!!!

Thanks again to Baker Act for some terrific music!!!

Posted by tikitender at 8:07 AM No comments:

Thanks to everyone who voted for me. For the third year in a row, I was named Backstage Pass Magazine's "Florida's Favorite Bartender". I could not have done it without you!!!

Posted by tikitender at 9:21 PM No comments:

I had the extreme pleasure last night of hanging out with The Boss Martians last night here in little old Flagler Beach. For a Wednesday night out in Flagler Beach, what else would we do but meet at the Golden Lion for food and beers? Had a great meal with the band, Mrs. Tiki, DJ Vern, Terri, Scott, and Terri's surfing friend Barbara.

After dinner the girls went home and us boys went to Poor Walt's (really the ultimate Flagler Beach experience) and watched everyone play pool.

During the course of the evening, I found out alot about the guys. Now I am even more excited to see them Sunday night in Jacksonville!!!

BIG NEWS right now is that IGGY POP has co-written AND performed on the new Boss Martians album entitled "Pressure in the S.O.D.O.", scheduled for release in Europe in Nov 2007, and on July 8th, 2008 in the U.S.!!

The album, mixed by Rock & Roll genius Jack Endino (Nirvana, Hot Hot Heat, and everyone else that rules), features a song entitled "HEY HEY YEAH YEAH" which is currently featured on six E-Trade TV commercial ads running thru 2009 in the U.S. and Canada , and to top that -- one of these ads was just announced as being one of the MOST POPULAR ADS OF SUPER BOWL XLII!!!
*info from The Boss Martians myspace

For a refresher, here is the original e-trade ad from the Super Bowl. You can hear the Boss Martians at the end of the commercial.

Posted by tikitender at 6:30 AM No comments:

Email ThisBlogThis!Share to TwitterShare to FacebookShare to Pinterest
Labels: music 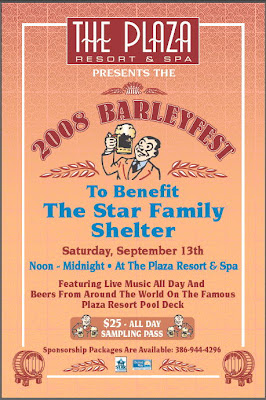 THE BARLEYFEST IS A BENEFIT FOR THE STAR FAMILY CENTER (for more information on the STAR Center, Please visit www.homelessindaytona.org) at the PLAZA RESORT AND SPA in DAYTONA BEACH! Enjoy sampling beers from AROUND the WORLD, LIVE MUSIC And the Famous OCEAN DECK at the Plaza!
Posted by tikitender at 4:25 PM No comments:

Sunday night I am riding up to Fuel with DJ Vern to enjoy Boss Martians live!!!