First off, I'm no journalist. I didn't sit in the back of the venue and take notes. These are just my memories of the show while they are still fresh in my mind.

Let's start with the venue, The St. Augustine Amphitheater. I first discovered this venue last year when I attended the Blackwater Sol Revue, featuring Toots & the Maytals and J.J. Grey & Mofro. I am totally smitten with this venue! Seating about 4,000 fans in mostly covered seating and located only 40 minutes from my house, it is perfect for an "intimate" night of music. Papa Roach, Jackson Browne, and Willie Nelson have played there recently. Upcoming artists include The Moody Blues & Aretha Franklin. Their Winter Wonderland festival will be starting soon, complete with an ice skating rink, sleigh rides, and and ice slide! Check out this venue here: http://staugamp.sjcvenues.com/ 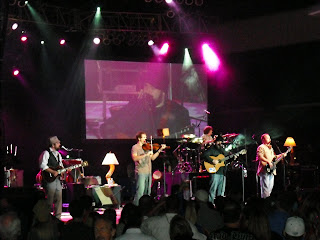 Of course, we had pretty good seats! (that's not a zoomed in photo)

The Music:
Levi Lowrey www.levilowrey.com
Levi Lowrey started off the show in mellow style. Mellow, yet intense. Dressed just in black, with a scruffy beard he is more folk than country. His rootsy style was very engaging and perfect as an opening. His candid and direct lyrics mirror those of Zac Brown's songs. He was joined on stage by members of the Zac Brown Band and later my Zac himself, as they sang a song they wrote together. "I don't need a roof above my head. I'd sleep in the dirt if you hold my hand."

Here is a video from a previous show, found on Levi's Myspace page:


Sonia Leigh www.sonialeigh.com
Raw and raucous, Sonia sings and plays with balls. With a style that would be welcome in Austin, TX or Athens, GA as much as Nashville, I have to thank Zac Brown for exposing me to this artist. Her torn jeans, swagger, and spiky hair defy the country prototype (fitting in perfectly with the rest of the tour). She was introduced by Brown as "the lady that keeps them all in line", but I can imagine her as the first one in line to buy shots of whiskey.

Nic Cowan www.niccowan.com
Nic, who reminded me most of Citizen Cope, added a little funk to the opening trifecta. Like the others, he falls outside the country music archetype. His "Money Don't Make You Happy", with its clever lyrics and syncopation is reminiscent of G Love & Special Sauce. His opening song was a wicked cover of Europe's "Mind In The Gutter" and was much better than the original.

Like the other two acts, Nic was accompanied by various artists from the Zac Brown Band.


Zac Brown Band:
As much Allman Brothers as Oak Ridge Boys, ZBB is a far cry from traditional country. Or are they more in tune with traditional country than any of today's acts? When all of the members and guests were lined up on stage we were treated to a hammond organ, two drummers, an additional percussionist, a cello, madolin, dobro, fiddle, stand up bass, electric guitar, bass guitar, and two acoustic guitars. Let me tell you, they sounded good. The stage announcer was dressed in a smart suit and reminded me of a revivalist preacher. The band featured nary a cowboy cap. In my opinion, they are much more authentic that the Kenny Chesneys and even Garth Brooks' of the world. They have been touring and playing together since 2005. I became a fan about 3 years ago when I heard "Free" on their myspace page. I have had a link to them on my site ever since. They were nominated in this years CMAs for Best New Artist. They didn't win, but left their mark on the show with a killer cover of "Devil Went Down To Georgia".

The music is always Southern, but not always country. From bar-room anthems like "Toes" & "Where The Boat Leaves From" to haunting ballads like "Free" and "Highway 20 Drive", the crowd sang along with all of them. Flashes were going nuts at the end of "Highway 20 Drive", a song about children of divorce, when Zac Brown's father came onto stage.

Show Highlights:
Junkyard, a haunting tale about hatred and eventually forgiveness. Brown based this song on his memory of sitting in his room with his pocketknife plotting to kill his step-father. In the middle of the song, the band broke out into Pink Floyd's "Is There Anybody Out There?". I actually quite enjoy the tips of the hat they give to influential artists.

Devil Went Down To Georgia. The fiddle player in the band is top notch, and so is Brown as a guitar player. Both solos ripped up the middle of the set.

Where The Boat Leaves From. One of my favorite songs, enhanced by a "One Love" interlude that took me totally by surprise.

Free / Into The Mystic. The song that made me a fan didn't disappoint live!I Shall Be Released. The full band plus guests came out for the last song, a cover of Bob Dylan & The Band. Standing ovation as each member was introduced.

My impression of the band was this: They were much more talented than I expected. In these days over overdubs and, particularly in country music, studio musicians it is easy to get disappointed at a live show. No such problem with ZBB. They could literally play unplugged in a parking lot and sound better than most bands. With that being said, click below to watch them playing in a parking lot!

Last but not least, some photos from the night: 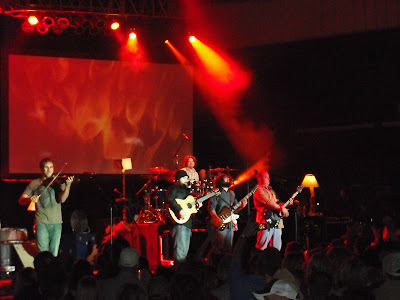 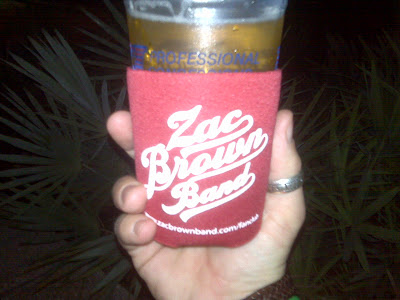 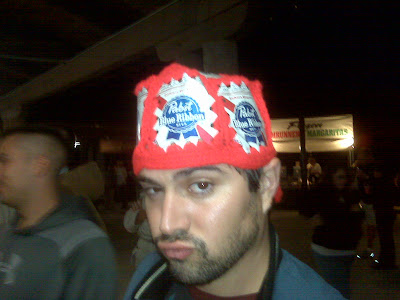 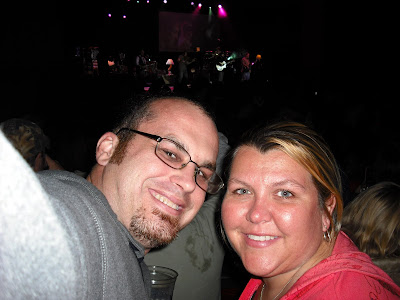 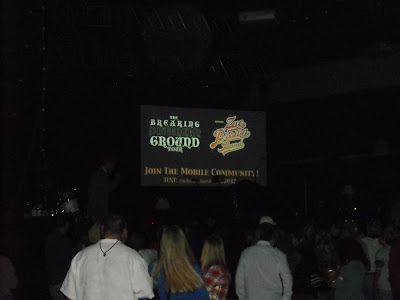 Posted by tikitender at 7:35 AM